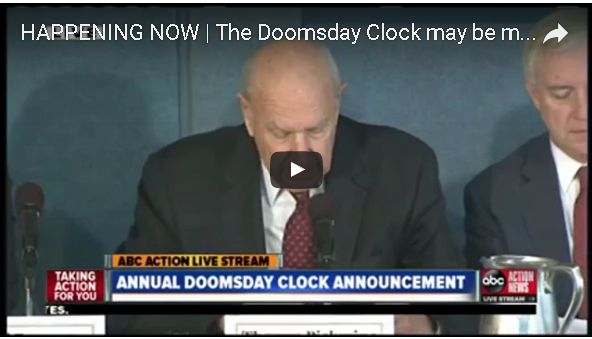 This video is an announcement from the Bulletin of the Atomic Scientists on January 26, 2017

The following is from the 1/11/ set of predictions for 2017
1. There will be no doubt that some will look back upon this point in history as the time set in blind preparation for a war between powers. Many reading this now will not believe that it is possible nor can it be fully understood merely within the context of history. Given the problems of global ecological collapse, human over-population, and a willful denial in the face of dwindling resources, many will also ignore the signal of promised nuclear arsenal upgrades by the President Elect Donald J. Trump. This occurred shortly after China’s testing with respect to a multiple nuclear warhead delivery system (MIRV). We also know that Russia’s nuclear arsenal upgrades are likely to have been recently established. Most dangerously, India, and Pakistan also have interests in new technology and information that might glean a strategic advantage. North Korea has also an interest although its threat is eclipsed by an overt positon that other actors like Israel are best not to afford. These systems are all designed first and foremost to be used and yet, they are often associated with Kissinger’s strategic deterrence under President Dexedrine (Richard M. Nixon). As we should be warned, the success of Kissinger’s brilliant policy then operated under a different set of world rules. Today, nearly every significant social institution is failing with measure whereas during the time of Nixon, the perception of this as a highly probable future permeated the thoughts and expressions of change agents.
The purpose of presenting a non-historical source of information requires the informed choice. That is, we no longer have an excuse for decisions that were once blindly taken for granted nor should we remain complacent about authority. In essence, we must question authority and the crumbling institutions that loudly encourage conformity and order in a world of increasing disorder.