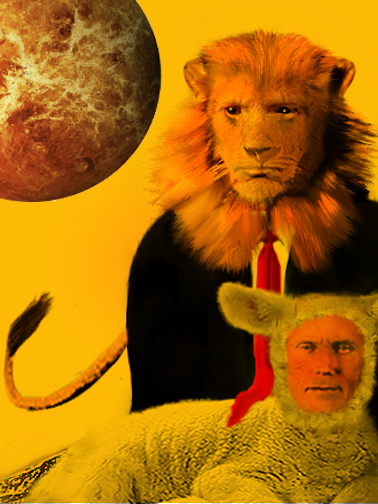 “The Mandela Effect” by A.C.H.

In the image above, we see a lion standing either before or beyond Venus. This is in part to suggest that Donald Trump’s virtue best represents hope within one’s darkest hour. When thinking of this, we can best understand what Christ meant when stating in his own words that he was “the bright morning star…” (Revelation 22:16).

After several remote viewing sessions beginning in late December of 2015 through October 31, 2016 I have a limited view of just who will become the 45th President of the United States in 2016. Although the early January 2016 prediction list revealed that Donald Trump would eventually face his opponent for the National Elections, I must take exception to the idea that viewers in structure can not distort the overall meaning of their work.
Now as we look back to the original viewing for the January 2014 predictions, we find the following:

2. For the first time in America’s history, a woman will likely meet the long awaited challenge to effectively campaign for the position of either a Vice President or President concerning any party. I also believe that a voter based push against supporters of the Affordable Care Act prior to the national elections in 2016 will to some extent distort the views and expectations of the Republican Party. Success for any Republican Presidential Candidate in 2016 will largely depend upon the ability to effectively project acceptance without judgment. This means that “hatred” in the usual form of religiosity must no longer indiscreetly involve political platforms.

As for Donald Trump’s Vice Presidential pick, we find that his choice does not line up with the prediction in terms of gender and if it had, I am certain that his path for the Presidency would have been assured in terms of a more predictable outcome.

Does this mean that Hillary Clinton will be our next President of the United States in 2016?

When remote viewing this, I have found an equal number of contradictory sessions that were performed blind, front-loaded, and indirectly stacked by persons unaware of number assignments, etc.
To say the very least of this effort, I am intrigued. The techniques that I use to find the best possible solution have produced an outcome for this election cycle. Again, I am working with highly experimental techniques that have a proven track record of a nearly 61% average rate of success.
Horizons
With remote viewing, there are three sources of information. The first I refer to as historical and the second is non-historical. There is a third source that relates to observation, influence, and awareness, etc. Horizons exist with respect to each source and more importantly, a non-historical source of information requires that viewing remains slightly behind a horizon. Important trajectories are also found beyond this point.
Conclusion

Now that I have nearly exhausted a limited source of relative information to determine who will win the national elections in 2016, I am naturally inclined to pick the outlier rather than a more rational and predictable choice of Hillary Clinton. Although the Clinton campaign is brilliant, capable, and backed by a world of established powers, I am stimulated by the unexpected and feel that our nature is best served by foundational patterns. It is a fact that without the error, I would not be the remote viewer I am today nor would we exist.

Should the following be misunderstood as an error, so be it. I am displaying this for the interest I have in observation and what is considered to be a question of the optimal outcome. Where am I in terms of the aforementioned horizon? Perhaps it does not matter as the following requires that we engage honestly in choice while understanding consequence.

A Trump win would provide a new yet futile day in the sun for independence while a Clinton win will assist in world participation toward the purchasing of time in lieu of human extinction.

The outlier results favor Donald J. Trump as the 45th President of the United States. This is going to be my choice as an optimal trajectory and the unexpected outcome for the 2016 election cycle.